How Inflation Affects Compensation: What Every Comp Pro Should Know

Headlines everywhere are focused on inflation: How it affects buying power, cost of living and rising wages, and the tight talent market. But are these things linked? How so? And what does it mean for HR professionals both now and in the future?

The connection between wages and inflation is complex and nuanced, but you don’t need to be an economist to grasp the basics. As a compensation professional, understanding this relationship can help you learn more from your market data and develop compensation strategies to match economic circumstances. Here’s what you need to know about inflation, wages, and how the two interact and affect each other.

Inflation and Its Roots

Let’s start with a quick primer on inflation. Inflation often gets billed as a terrible, looming threat. And runaway inflation can indeed be disastrous.

For example, in the 1920s, Germany experienced such dramatic inflation that the event was named the Weimar Hyperinflation, after the government in charge. At the peak of the hyperinflation, a single US dollar was worth 4.2 *trillion* of the German currency, the Mark. A single loaf of bread cost billions.

Most inflation isn’t anywhere near the level of “you need to be a billionaire to buy lunch.” In some conditions, economists even consider inflation a good thing. ‌The U.S. Federal Reserve, the institution in charge of monetary policy, spends a good deal of time managing inflation. One of the Reserve’s fundamental strategies is to not only allow for inflation but to target an annual inflation rate of several percent.

If this sounds crazy, I assure you, it’s not. The Fed sets inflation targets for good reason. Without inflation, the economy will get to a point where it can no longer grow. In this scenario, individual companies can be profitable but any gains they make come exclusively at the expense of other businesses. There just isn’t enough money for everyone to increase their profits.

Adding inflation into the mix eliminates the need for some people to lose so that others can win.. For example, 4% inflation would mean companies nationwide can grow their profits by 4%. This small amount of inflation is crucial for keeping companies and the stock market growing every year.

The Intersection of Inflation and Wages

Now that we’ve level set on what inflation is and what it means for the economy, it’s time to dig into how wages and talent markets influence - and are influenced by - inflation.

Do Wages Rise Because of Inflation?

Yes! Inflation causes the price of everything to rise, from your daily cappuccino to the labor your company hires. Economic growth and subsequent inflation gives the appearance that wages are rising. The average hourly compensation rate in the U.S. in 1964 was $2.50, and in 2018 it was about $22.65.While that seems like a massive increase, the relative value of that money has shifted.. After all, a loaf of bread no longer costs $0.25 either.

The Pew Research Center found that the actual compensation of the average American hasn’t really changed in the past fifty years. When adjusted for inflation, $2.50 in 1964 would be worth $20.27 in 2018. In half a century, the actual pay of most workers has only increased by about 10%. That small increase isn’t caused by inflation; it’s the actual increase in how employees are valued in the U.S.

But Do Higher Wages Cause Inflation?

Also yes! When factors like tight talent markets or labor shortages cause companies to raise their compensation levels, this influx of disposable income can drive up demand and therefore increase prices.

Higher wages also can influence inflation when companies who have raised their compensation rates need to fund that increase somehow. Few businesses are so profitable that they can fund the entire compensation increase without changing their practices, and many that have that flexibility don’t want to eat into their profit margins. That money has to come from somewhere, and the simplest solution is to raise prices.

Eventually, prices and wages reach a new balancing point. The cost of consumer goods in general rises to fund the new, higher wage rate. This is called “wage push inflation” because the increase in wages pushes the market to have higher prices.

Wages and inflation aren’t always in sync, and there are differences in how inflation is reflected in compensation across industries, at different job levels, and even in different parts of the country. Looking at wages on aggregate doesn’t always give the complete picture. It’s possible for some jobs or industries to see major wage spikes without wages in general creeping up that much. Alternatively, it’s possible to see wages growing on the whole while some job categories, industries, or markets continue to stagnate.

Today, wages and inflation are not lining up. The current levels of inflation are not being caused by wage increases; in fact, despite compounding with worker shortages, base salaries haven’t increased as much as we might expect. Things are changing fast, though. An August pulse survey from Mercer showed merit increase budgets expected to increase 3.2%, though more than half of their respondents noted that those numbers were preliminary and likely to change before being finalized.

Some of this comes down to cost of labor vs. cost of living. Much of what market pricing does is provide insight into the cost of labor for a given role, job family, or geography. Unfortunately, market pricing data today is typically behind the reality your employees and hiring managers are facing, meaning that the comp professionals who keep an eye on economic factors will be stronger business partners and see better success in recruitment and retention.

So, what does all that mean relative to our current situation? The inflation we’re seeing right now is unprecedented in the modern era, reaching 8% between March 31, 2021 and March 31, 2022. It’s being fueled by a perfect storm of supply chain challenges, the Russian invasion of Ukraine, the tight talent market produced by the Great Resignation, post-pandemic spending sprees, and a variety of other factors.

For the past 20 or so years, the economy has been going what many economists call “gangbusters.” (It’s a technical term.) For many, wages have not kept pace with this growth. According to the Economic Policy Institute, if compensation had increased with productivity, the average middle-class family would make more than $17,000 per year more than they currently do.

Ultimately, these types of imbalances will right themselves. Today’s tight talent market is pushing wages higher in a short period of time, yes, but it’s helping to redress the gap between productivity and compensation.

While the Great Resignation and subsequent tight talent market have pushed wages higher, there is still a gap between increases in employee compensation and prices.

Recent data from the Bureau of Labor Statistics shows that, despite an overall increase in compensation, real average hourly earnings (a metric that measures the value of compensation relative to consumer price index) decreased .8% between February and March and 2.7% from March 2021 to March 2022. That means, a $1,000 paycheck in 2021 equates to $973 today - adjusted for average compensation increases.

For the impact of wages relative to inflation on a longer timeline, housing is a great example. An average home in the U.S. in 1960 cost about $11,900, or $98,000 after adjusting for inflation. Today, the average is $210,200. While workers earn slightly more on average, the cost of a house has more than doubled. Apartments have gotten more expensive, too. The cost of renting an apartment has increased 72% even after inflation adjustments. As a result, a greater percentage of workers’ paychecks is being allocated to housing, leaving less for other necessities - or even luxuries.

Compensation Response to the Market

As employees continue to feel the effects of inflation and companies the effects of a challenging labor market, compensation continues to increase. Supporting the Mercer data referenced above, a recent survey by Willis Towers Watson found that companies forecasted average salary increases of 3.4% vs. the 3.1% forecasted in July 2021. Larger jumps were common in industries that were more heavily affected by the pandemic. What’s more, employees are closely monitoring inflation and the current talent market. These things are playing into their expectations for annual salary increases, according to SHRM.

Beyond annual salary increases, a number of companies are leveraging more frequent pay bumps including mid-year market-based salary reviews and spot bonuses to help assure compensation aligns with the market. With minimal ability to decrease base pay relative to inflation and an uncertain economic outlook, companies are also looking at perks and benefits as a means of addressing employees’ needs.

What This Means for Compensation Market Data

As a compensation professional, you’re responsible for balancing your company’s needs with those of your staff. When you’re trying to walk that tightrope, you might not be thinking about the wider impact of inflation and wage growth. Still, you can get a lot more out of your compensation surveys if you pay attention to these trends.

Why? Because your employees live with the impacts of these

trends every day. If inflation is high, a cost of living adjustment may just be an adjustment, not a raise (in real dollars) at all. It could barely keep your staff treading water. Not giving someone a raise in high inflation years is the equivalent of *docking their pay*. They literally can’t buy as much with their income.

Your staff will see this, too. It’s hard not to notice when a paycheck that used to cover everything they needed is suddenly getting tight. You’re going to have a hard time keeping your crew motivated or bringing in new talent when your compensation rates aren’t growing with the economy.

When you’re completing market analysis, you should keep economic factors in mind. From general inflation to the cost of housing and education, your compensation levels need to reflect economic conditions - particularly as survey data often lags several months behind the economic reality on the ground. Otherwise, you’ll lose out on the talent and productivity that make your company special.

Inflation is an economic fact. Even when labor shortages aren’t threatening wage push inflation, the Federal Reserve still lets it happen. It pushes both wages and the cost of living higher, like the proverbial high tide raising all boats.

When you’re trying to keep your staff happy and loyal, that’s important information to track. When you’re working on setting compensation rates for different positions, inflation should play a role. Do your due diligence, study your market data, and then check in with projected inflation and cost of living in the markets that matter to your business. You’ll be prepared to make the best compensation decisions for everyone.

Want more insights on how to build your comp strategy to account for inflation and other economic challenges? Check out this discussion between Michael Pires from Decusoft, Dan Moynihan from Korn Ferry, and me where we dig into this topic. 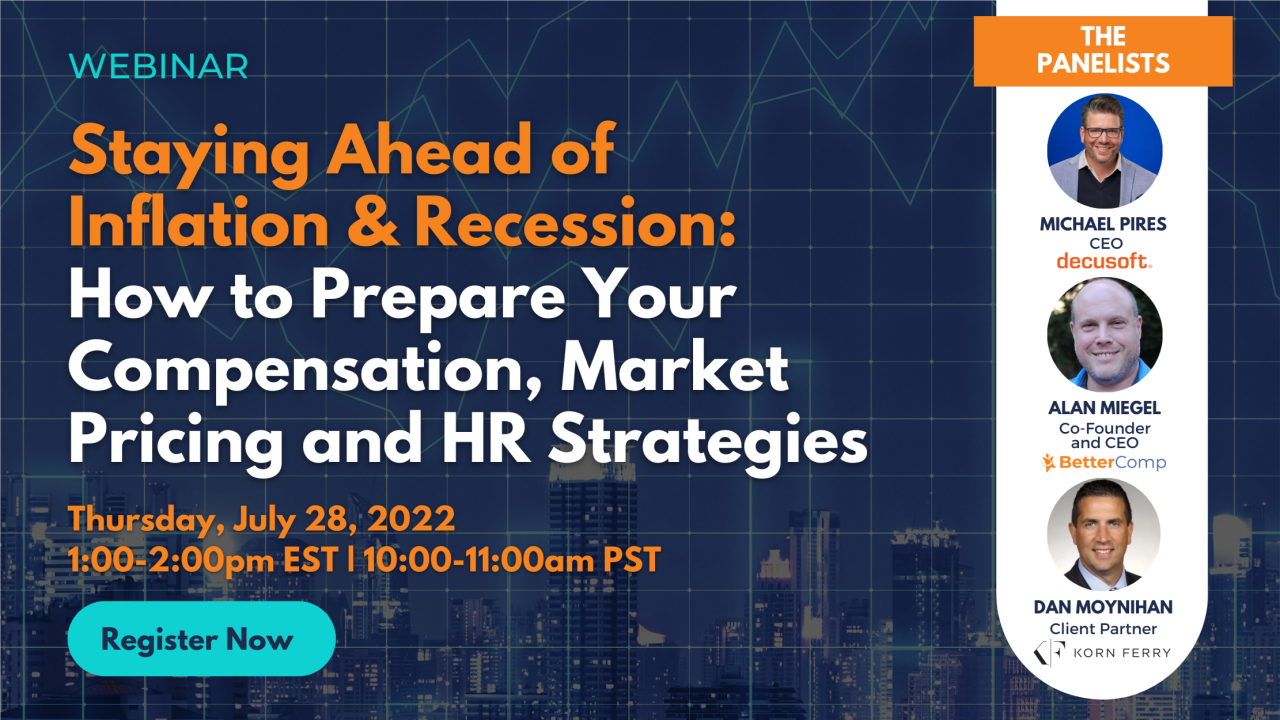 Alan is the CEO and Co-Founder of BetterComp with 20 years of compensation market analysis experience.